Surveying methods used vary greatly depending on species groups and sampling networks they target. While surveys covering species diversity in habitats take place in numerous small circles, surveys covering species diversity in landscapes require a series of large areas to be searched for plants or animals. Still, all field surveys share the importance of covering the exact same area using the exact same method each time.

Occurrences of vascular plants and butterflies are surveyed along a 2.5-kilometer track (so-called “transect”) that follows existing trails wherever possible. The transect routes, the number of field trips (one or two for vascular plants, four to seven for butterflies, depending on elevation), and the time intervals between field trips are predefined for each sampling area. Every species fieldworkers find is electronically registered on the spot.

Breeding bird surveys and surveying methods largely tie in with the Swiss Ornithological Institute’s Monitoring Common Breeding Birds program. Whenever possible, breeding birds are monitored covering the whole sampling area. Depending on elevation, each sampling area is monitored on the occasion of two to three morning field trips during a predefined period of time.

Species diversity of vascular plants, mosses and mollusks (snails) is recorded in circular sampling areas of 10 m2 each. Every vascular plant species fieldworkers find is electronically registered on the spot. Depending on elevation, plant surveys take place once or twice a surveying year. In addition, sampling areas are systematically surveyed for mosses each spring. A sample is taken of each moss species found, to be subsequently identified in the lab. Mollusk species diversity is surveyed by taking eight soil samples at the perimeter of each sampling area. These soil samples are sent to the lab, where experts elute the shells and identify them under the binocular microscope.

On top of the occurrence of species, habitat types and land uses are recorded as well. Due to the small size of the sampling areas, they must be marked with utmost precision. BDM fieldworkers determine the location of each sampling area using a GPS device. Moreover, they bury a magnet at the center and enter clearly visible points of reference in a so-called “back-up log”.

Aquatic insect species diversity is established by kick-sampling the aquatic larvae of mayflies, stoneflies and caddisflies. The length of each watercourse section surveyed corresponds to ten times its width.

“Diversity of species communities” describes the development of species compositions in various habitats and within Switzerland’s individual regions. It is based on presence and absence data of individual species gathered in the two BDM sampling networks.

Each of the three circles is home to three species. Sharing two species, the circle in the middle is more similar to the circle on the left than to the one on the right, since the latter holds just one species occurring in both.

Diversity of species communities is computed as follows:

The mean value of all Simpson’s Indexes calculated in this manner and expressed in percent (between 0 and 100) corresponds to the indicator value. In order to assess the indicator value’s accuracy, a jackknife method is used to establish a confidence interval.

The Hotspot special edition on 20 years of BDM shows who works behind the data and highlights current developments in biodiversity. 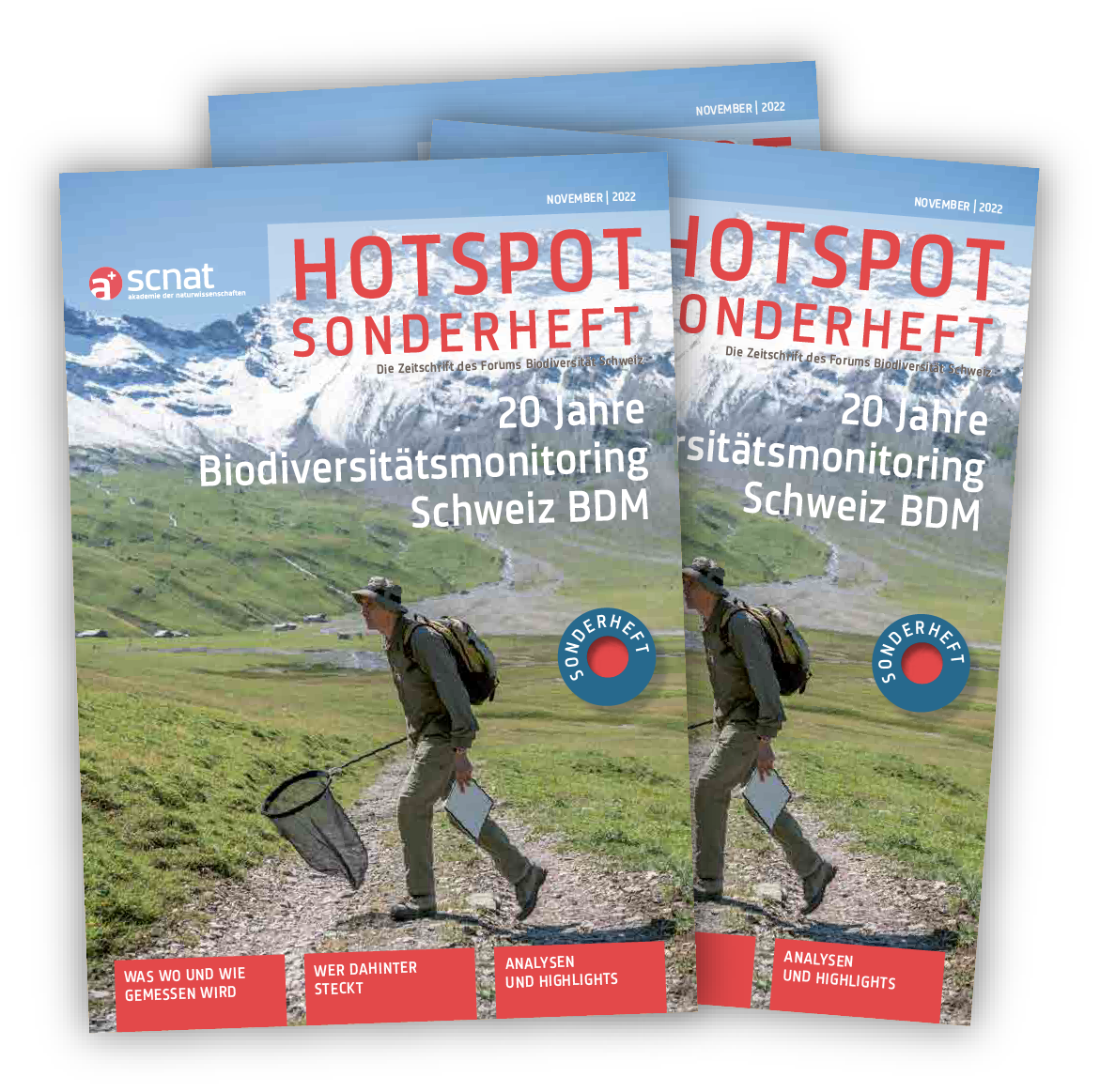 Following the link below, BDM fieldworkers will find detailed descriptions of all fieldwork and labwork methods. These documents are also available to interested outside experts.

A report from 2014 summarises the concept behind this programme of the Federal Office for the Environment FOEN in a straightforward and comprehensive way.

Fieldworkers record all vascular plants, butterflies and breeding birds found in an area of 1 square kilometer in size. To do so, they usually follow a precisely predefined track along trails or roads. 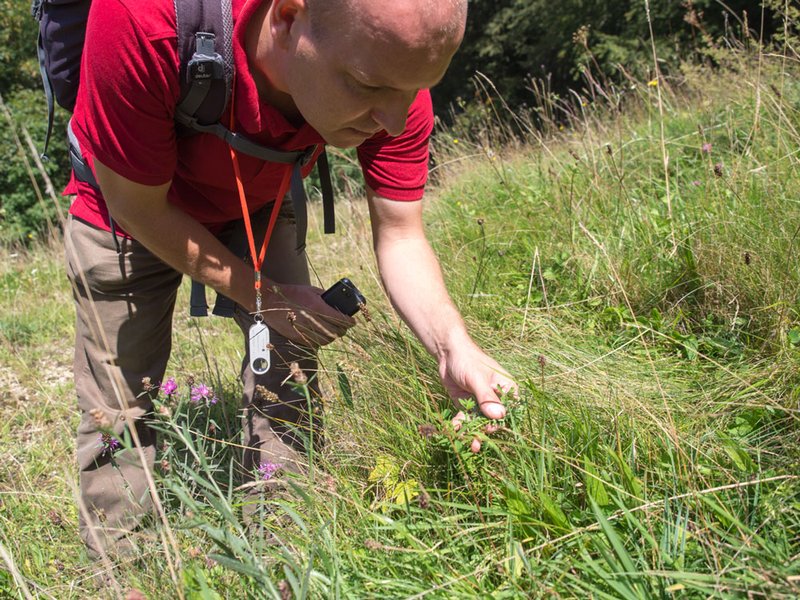 Fieldworkers record select species groups found in only a small area – typically 10 square meters on land or 5 to 100 meters along a watercourse. Vascular plants are identified directly on the spot, whereas mosses, mollusks and aquatic insects are sampled in the field to be subsequently identified by specialized laboratories. 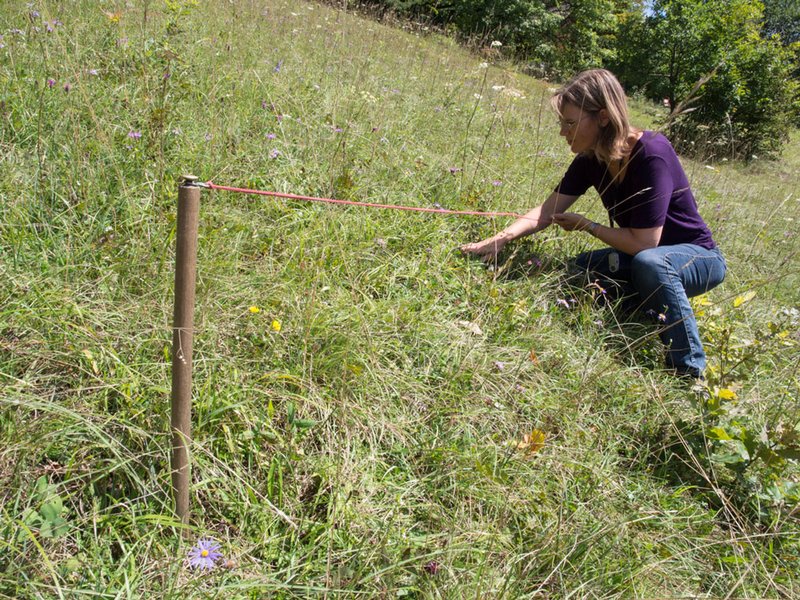 A selection of all published reports and brochures for consultation.